by The Vegetable Plot 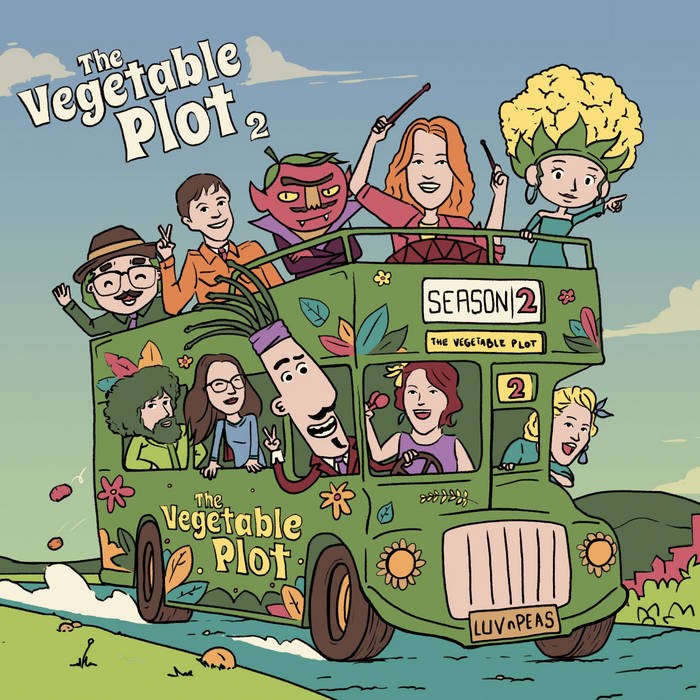 Roland mr. potato makes my daughter dance in the kitchen non-stop...thats´s why I love this album :-) Favorite track: Mr Potato.

Bigger, bolder and funkier in every way, the long-awaited sequel to Season One introduces some fresh new characters to the plot, as well as bringing back some beloved, old favourites. A perfect album to listen to again and again on those long family car trips.

Songs
Words and Music by Luke Escombe* with extra musical elements by Michael McGlynn
“Artie’s Community Garden” gratefully borrows elements of the wonderful song “Everybody eats when they come to my house”, written by Jeanne Burns and performed by Cab Calloway

This album was partially funded through the Australian Cultural Fund.

A fresh, funky soundtrack to the food revolution for kids, families, and foodies.

It’s time to take a cruise
to the land of snooze
with your cuddly toys as your crew
hold them tight while you kiss good night
to your mum or your dad as they turn out the light
click
the room goes dark
dark like a shark
some people are scared of the dark
but not you
not any more
cos you know that you’re here to explore….

maybe have a little tinkle tinkle
maybe sing a little Twinkle Twinkle
little star that’s who you are
now your bed is a flying car
now your car is a steam-powered boat
now your boat starts to float…..

Pajamazon
put your pajamas on

Mr Potato has a moustache
he likes to rinse and take hot baths
the other night he got mashed
and the night before that he was smashed
Mr Potato he’s versatile
with his jacket, oh he’s got style
Mr Potato
Oh oh oh

Mr Potato lives in the soil
he likes to bathe with olive oil
he loves rosemary and tarragon
he loves dill, chilli and lemon
salt and pepper, and garlic too
he loves me, oh and he loves you
Mr Potato, so good to eat
he’s the best friend you’ll ever meet
Mr Potato
Oh oh oh

We’re waiting
for a bus
is that our bus?
“Not in service”
that was not our bus

The people in their cars
look out of the glass
like prisoners in solitary cells
sitting all alone
staring at their phones
filling up the air with stress and dust and smoke and stress
and all kinds of toxic, nasty smells

We’re waiting……still waiting
for a bus
is that our bus?
well, it is slowing down
it’s stopping……the doors are opening
[gasp]
OMG
THAT’S OUR BUS!
[All aboard]

In the land of nightshade
there do dwell
tom arto, tom ato, potarto, potatoes as well
red bell pepper and eggplant too
some people say that the nightshades are deadly for you

So we say please, of us beware
we don’t want your tummy to despair
if when you eat us, you don’t feel great
maybe you should keep nightshades off your plate

In the land of nightshade
there are flowers and weeds
some of them have poison inside their seeds
like Belladonna, my sister cruel
she can leave a blister inside you

Hello bulbs and girls, welcome to Artie’s community garden
I hope you’re all hungry
cos everybody eats when they come to my patch

Hello, what’s your name?
Sean
Sean, have some corn
and you?
Peg
here Peg, have an egg
have a bean Dean
have some peas Louise
everybody eats when they come to my patch

and your name
Jess
have some cress
and you?
Dale
here Dale, try some kale
try a leek, Zeke, eat some squash Josh
Everybody eats when they come to my…

There’s just so much food growing all over the place, can you see it?
No
Look closely now, see

We’ve got Aspara Gus growing here
Rocket and Ru Barb over there
We’ve got Collie, Sue Kini and Baby Broccolini
Everybody eats when they come to my community garden

Okay, what kind of vegetable do chickens grow on?
Eggplants!

What about this, why did the potato go to the doctor?
Because he wasn’t peeling well

Oh I’ve just thought of another one
Knock knock
who’s there?
can o’ peas
canna peas who?
can o’ peas come inside the house
Moooooo!
that joke was rotten Artie
ah well, we’ll just put it on the compost heap with the others
now look here

We’ve got potato and turnip too
all that we need for a veggie stew
we’ve got basil, tomato, thyme and oregano
everybody eats when they come to my….

Have you seen our chooks?
uh-uh
look
this is Mildred, Daisy, Margaret, Maisie
and just look at these eggs they’ve been laying,
aren’t they amazing?

And look over here, we’ve got bees
oooh
this is Busby….. (buzzing sound)
actually, I haven’t got around to naming all the bees yet
the problem with bees is they tend to drone on

Oh hello, you’ve got your hand up,
do you have a question?

Aren’t vegetables afraid of being eaten?

Oh, what a good question. Can I tell you something? Vegetables LOVE being eaten. That’s right. It’s what we live for. You see, vegetables and human beings are partners.
We feed you and you grow us, and the more you eat us, the healthier you’ll be. You see friends, we’re not scared of you, so why should you be scared of us?

Wonderful! Thank you for coming along to my community garden today bulbs and girls, and remember, everybody eats when they come to my patch.

And now bulbs and girls, I’m very excited to announce that we have a live band playing at my community garden today. Please welcome, all the way from your kitchen….The Herby Hancocks!
Track Name: Herbs and Spices
10. Herbs and Spices
Lead vocal by Star Anise

Parsley on the highway
It’s just Oregano day
Cinnamon in a Mint condition
Chevrolet
Salt and Pepper
Shake the cellar
Turn the speaker
Paprika Paprika Paprika freak out!
get Freekeh!

Artie
Ladies and gentlestems, introducing the members of the Herby Hancocks
On drums Dill Collins
On bass Jalapeno Saladino
On keys Cory Ander
On guitar Turmeric Clapton
On percussion Paprika
And on vocals Star Anise and the Five Spice Girls

Join us on this fresh food revolution!

Gramma
Well I’ve been taking my time
Growing on my vine
I don’t come out till the winter time
Woah yeah
But then I come out sweet
So sweet, you’ll say my gosh
you better not rush a butternut squash
Oh no, you just let me be
You’ll be mumbling
ain’t she something
with your mouth full of pie made from sweet
Gramma Pumpkin

My name is Gus, I drive a green bus
filled with my friends
we meet lots of folks and play music to them
we laugh and we sing
we all jump around
all of us once lived

Ladies and gentlestems, bulbs and girls
it’s time to get up out of your flower beds
shake off the dirt
put your hands in the sky
do the jumping bean
and SING

Children of earth
Your planet is a marvel indeed
It gives you food to feed
Every soul in need
The flowers and veggies grow
Clinging to the dirt below
Reaching upwards to the sky
Plant them again, they never die

Bandcamp Daily  your guide to the world of Bandcamp

Tasty gems from around the world, plus interviews with Kaitlyn Aurelia Smith and Nick Hakim.